The Fauquier Amateur Radio Association is pleased to congratulate Rich Zwirko, K1HTV, on his recent nomination for, and award of the Krenkel Medal. The Krenkel Medal is a highly prestigious honor awarded to a very select group of international recipients, all of whom have made major lifetime contributions to amateur radio and radio communications.  Rich shares this award with such well known communications contributors as Monk Apollo (SV2ASP, SK), Joe Spier (K6WAO, AMSAT President), and Ellen White (W1YL). 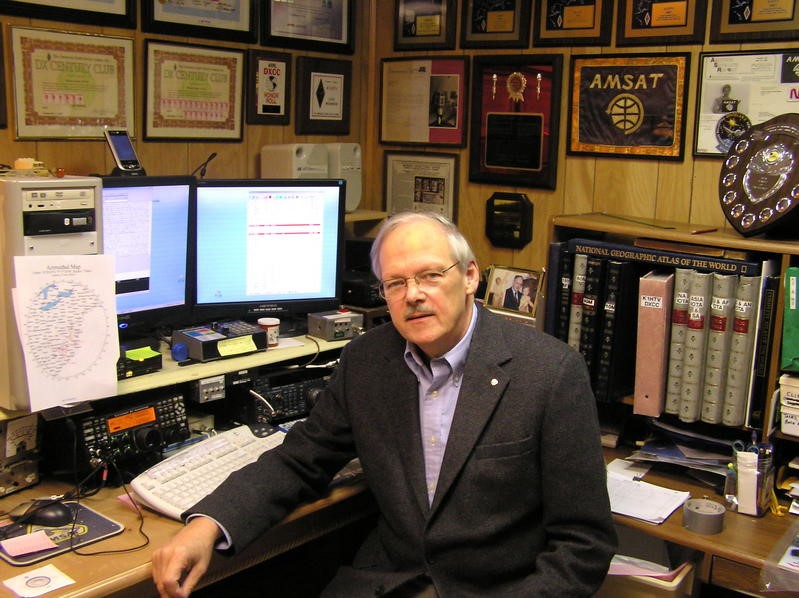 Richard Zwirko, first licensed as KN1HTV in 1958, has been continuously active in Amateur Radio using the callsign K1HTV for over 6 decades. He had a 48-year career in commercial and U.S government radio broadcasting. After 28 years of service at the Voice of America in Washington, DC, he retired in 2008 as senior Technical Support manager. 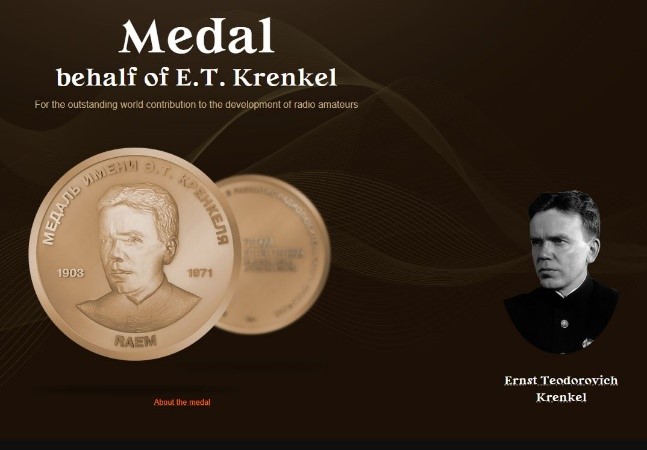 Rich, as a serious DXer, has worked DXCC on all 11 Amateur Radio bands between 160 and 6 Meters. He has 200 countries confirmed on 9 bands and over 300 countries confirmed on all 7 bands from 40 through 10 Meters. Rich is on the DXCC Honor Roll, only missing North Korea to achieve Honor Roll #1. All HF DXing has been done while running 100 Watts or less. He is an avid island chaser, working more than 1040 IOTAs.

His early interest in Sputnik and the first OSCAR satellites lead Rich to become Vice President of Operations and a member of the board of directors of AMSAT, the Radio Amateur Satellite Corporation. He served between 1974 and 1984 during the launch of OSCARs 7 through 11 satellites.

Rich was heavily involved in the early days of Packet Radio, digi-peaters and packet bulletin boards in the Washington, DC area. He was instrumental in the establishment of the first NETROM node on the East Coast of the United States. He served as system operator for numerous NETROM packet radio nodes in the Washington, DC and Maryland area. Having high interest in VHF propagation, meteor scatter and VHf DXing, Rich became heavily involved in the use of WSJT software since its first release in 2001. In 2017, when the new FT8 mode was created, he started DXing using that mode, working over 240 DXCC countries with 75 Watts or less.

In 2018, with the explosion of popularity of this new FT8 digital mode, Rich was approached by some of his visually impaired Ham friends asking if there could be a way that would allow them to start using the FT8 mode. A number of requests were made to the WSJT-X Development Group reflector looking for a software developer who would work with Rich to produce such a program. The resulting software in conjunction with WSJT-X, gives blind Hams a way to easily make FT8 contacts. Recruiting a number of visually impaired Hams, Rich worked with them as beta testers of the software. The program called Quick Log, QLog for short, was developed by W2JDB, and is now in the early stages of being released. Because of these efforts, blind Radio Amateurs will be able to make worldwide contacts using the new FT8 and FT4 digital modes. 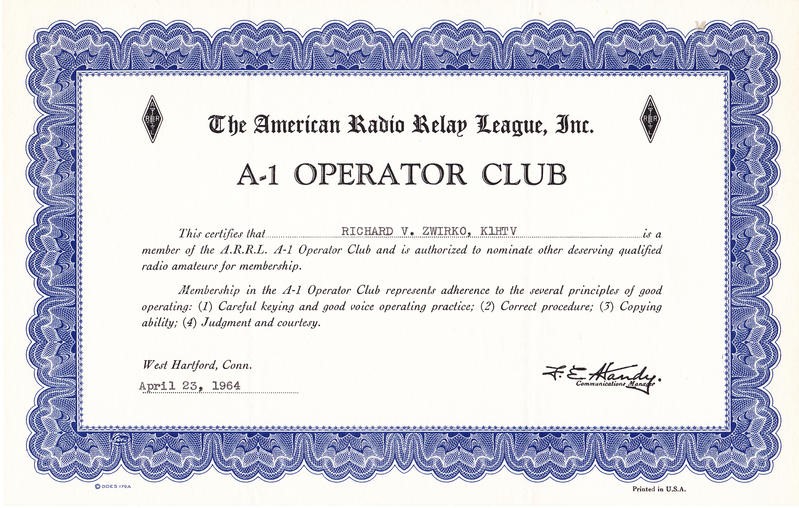 1965 – Daughter Christina born (ex-N3JMR, now KR1SSZ).
1965 – Purchased first house in Thompsonville, CT. Worked 36 states on 144 MHz, many of them via meteor scatter.
1960’s & ’70’s – Was a member of CWA (Connecticut Wireless Association). It was great associating with the likes of many old timers like W1BDI, W1TX, W1BIH, W1FTX, W1NJM, W1EOB (N4XR), W1JYH (W1AX), all SK as well as newbies (at the time) like W1BGD (W1RM), W1DGL (W1XX), W1ECH and W1WEF. Have lots of memories participating in the ARRL Field Day events with the CWA gang and guest ops K1ANV (W3ZZ), SK, W1FJJ (W1FJ) and W1NJL (K1VR).
1972 – Moved to Meriden, CT. Tried 2 Meter moon bounce (EME) with an 80-element collinear antenna and 500 Watts. Ran skeds with K6MYC, VK3ATN & Sam Harris (W1FZJ/KP4). Signals were heard both ways, but never was able to complete any 2-way EME contacts with them. A few years later, I worked WA6LET on 144 MHz via the moon using a single Yagi. In the 70’s was a control operator for AMSAT-OSCAR-5 satellite at the Talcott Mountain Science Center in Avon, CT. Worked 36 states (again) on 144 MHz from the new Meriden, CT QTH.
1974-1983 – AMSAT Vice President of Operations and member of the AMSAT board of directors.
1980 – Moved from Connecticut to Maryland to work at the Voice of America headquarters in Washington, DC, retiring in 2008 as a Technical Support manager.
1982 – Involved in Beta test of the TAPR Packet Radio TNC. With W3IWI (now K3IO), made one of the first Packet radio repeater contacts with other Packet Radio pioneers in the Washington, DC area. In 1987, was instrumental in persuading the west coast inventors of NETROM packet node software to allow for its installation in the first East Coast node (UMD) at the University of MD, with a KU-band wormhole Packet Radio link to California. Was sysop for numerous NETROM packet nodes in the Mid-Atlantic states. Created and distributed maps of the radio packet node network links throughout the USA. Started chasing HF DX seriously again in the 1990’s, always with 100W or less. 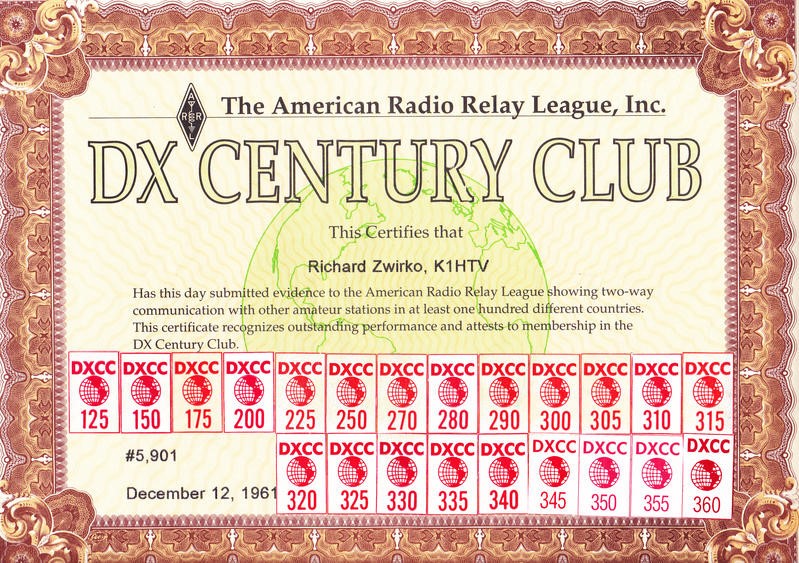 1994 – Joined the PVRC (Potomac Valley Radio Club) and have won multiple Atlantic Division and Maryland/DC section awards running low power in the annual ARRL Sweepstakes as well as section awards in a number of other ARRL & CQ 160 Meter contests. Was in the 6 Meter chair at multi-op K8GP June and Sept. VHF contests starting in ’94. For almost 20 years, operated at the 160M position at multi-multi superstation W3LPL in ARRL & CQ DX contests.
2008 – In December, I retired from the Voice of America as senior VOA Technical Support Telecommunications Manager. Wife Phyllis, K1WSN (SK) and I moved from our old Glenn Dale, MD QTH to our new home in Amissville, VA to be closer to son Andy (K1RA) his wife Amy (KZ1AMY) and granddaughter Anna, (K1AEZ).
2009 – Received a fully loaded Elecraft K3 transceiver from XYL Phyllis (K1WSN). I’m really enjoying retirement with this great radio.
2019 – After 10 years at the new VA QTH I have worked 323 DXCC countries, all with 100 Watts or less, the first 265 of them with only wire antennas. I’m now using a small 3 element triband yagi at 77 ft for 10, 15 & 20 Meters.

Fauquier Amateur Radio Association extends our warmest congratulations to Rich, and we look forward to many more years of service to our Club, our Community, new Radio Amateurs and to the Art of Radio Communications.